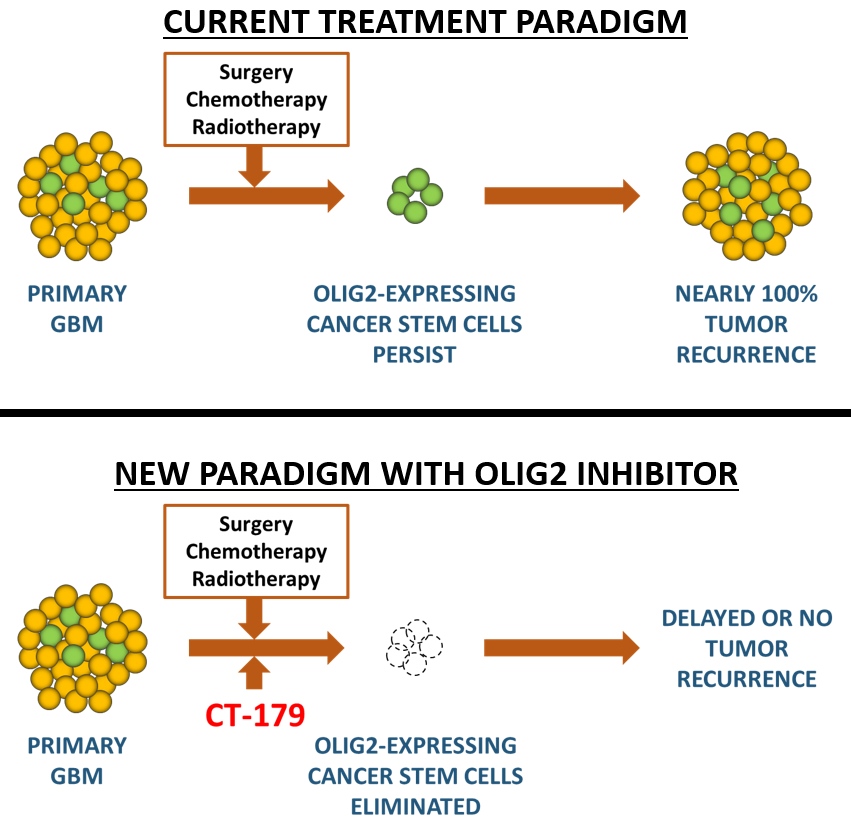 Glioblastoma is the most common and most aggressive of the malignant primary brain tumors in adults. According to the American Brain Tumor Association, an estimated 12,390 new cases of GBM are predicted in 2017. Conventional therapeutic approaches for GBM, including surgery, chemotherapy and radiation therapy, target the tumor bulk, but have limited effect on the glioma cancer stem cells (CSCs), which are responsible for the recurrence of disease that occurs in most of the GBM patients. Accordingly, GBM represents a significant unmet clinical need as the median survival is less than 15 months and five-year survival rate is less than 10%.

Curtana is targeting Olig2, a transcription factor important to normal brain development that has been shown to be a critical oncogene controlling tumor initiation, growth, invasion, differentiation and radiation resistance. Typically, Olig2 is not active in normal brain tissue. However, it is expressed in all diffuse gliomas and nearly 100% of the glioma CSCs, which makes it a highly attractive drug target.

“We are pleased that the FDA has recognized the potential for CT-179 to provide a significant therapeutic benefit to patients with GBM,” said Gregory Stein, M.D., M.B.A. and Chief Executive Officer, Curtana Pharmaceuticals. “GBM is a devastating disease with a generally very poor prognosis even with the best available care. CT-179, projected to enter the clinic in the first half of 2018, has been shown to significantly prolong survival in relevant animal models, especially when combined with the standard of care treatments, temozolomide and radiation therapy.”

The FDA Orphan Drug Designation program provides special status to drugs and biologics intended to treat, diagnose or prevent so-called ‘orphan’ diseases that affect fewer than 200,000 people in the U.S. This designation provides for a seven-year marketing exclusivity period against competition, as well as other incentives, such as federal grants, tax credits and PDUFA filing fee waivers.

CT-179
The Olig2 transcription factor is highly expressed in all diffuse gliomas and is found in virtually all GBM cells that are positive for the tumorigenic CD133 cancer stem cell marker. Curtana’s lead clinical candidate, CT-179, is a highly potent inhibitor of Olig2 that selectively spares normal cells and significantly reduces cancer cell migration into normal brain tissue in animal models. The drug is orally bioavailable, readily crosses the blood-brain barrier, achieves very high concentrations in the brain, and significantly prolongs survival in animal models of brain cancer. Importantly, CT-179 combined with standard of care temozolomide and radiation dramatically inhibits tumor growth and prolongs survival compared to either treatment alone in relevant animal models. CT-179 represents a novel agent which selectively targets glioma CSCs in preclinical studies with great potential as an adjunctive therapy in the treatment of GBM and other gliomas. An investigational new drug (IND) application filing is planned for the first half of 2018.

About Curtana Pharmaceuticals
Curtana Pharmaceuticals, founded in 2013, is a privately held, preclinical-stage biopharmaceutical company headquartered in Austin, Texas. Current investors include Thynk Capital, angelMD, Biosense Global, DEFTA Partners, and other anonymous investors. In 2014, the company was awarded a $7.6 million grant from the Cancer Prevention and Research Institute of Texas (CPRIT). Curtana focuses on the development of novel first-in-class, small molecule therapeutics targeting cancer stem cells in the central nervous system for the treatment of glioblastoma and other brain cancers. For more information, visit www.curtanapharma.com.